Society for the Confluence of Festivals in India
Celebrate Holi on 29th March, 2021

Holi Celebrations at The Dwarkadhish Temple at Mathura

Holi is one of the most vibrant and colourful amongst all the Indian festivals. The celebration of Holi takes place in almost every part of India. Holi marks the end of winter and welcomes the fruitful season of spring with all its fullness. Holi is also known as Dulandi Holi, Lathmar Holi, Basant Utsav, Hola, Dol Purnima, Rangpanchami, Shimgo, Phagu Purnima and Kaman Pandigai in different regions.

Nature of Celebration of Holi

Holy has been traditionally celebrated by smearing coloured powder on each other. These coloured powders called Gulas in Hindi. Also known as abeer it is believed to adorn the wearer with the beautiful colours of spring and give him joy from within. Coloured water sprayed through hand-held water pistons known as pichkaris play a big role in the celebration of Holi. 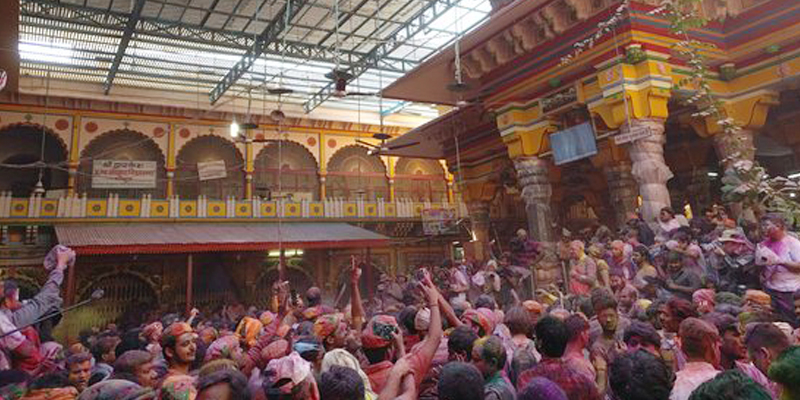 The mutual exchange of colours is believed to spread the joy and mirth amongst communities and neighbourhoods. The celebration is usually accompanied by refreshing drinks. Especially bhaang, which is a special drink prepared with great precision, is a prime attraction of this celebration.

The colour works are usually followed by religious offerings or pujas to the resident Gods of the household in the evenings. Elders distribute sweets among family, friends, and neighbours. Special sweets called Gujiyas are made on this occasion.

Holi has inspired the composition of countless songs and poems in praise of the brotherhood and mirth that it brings along with it.

The festival of Holi has a deep connection to the legends of Radha and Krishna in Indian mythology. Krishna who had a dark complexion was jealous of Radha who was fair. It is believed that he applied colour to Radha's face once out of jealousy to make her look more like him. This tale of ancient legend still makes lovers smear each other's faces with colours and celebrate cherish the love they have in their life.

The legend of Holika is also a key part of the tradition of Holi in India. The legend speaks of the demon king Hiranyakashipu who, with the help of his sister Holika tried to burn his son Prahlad by putting him in a burning pyre. Prahlad was unharmed while Holika was burnt to death. This legend celebrates the triumph of good over evil and has become a part of the tradition of Holi called Holika Dahan. A bonfire is lit in the evening before Holi to commemorate this miracle.

Since a lot of the legends about Holi revolve around the stories of Krishna, Holi is celebrated with great zest and enthusiasm in places which are a part of the life of Krishna. Places like Gokul, where Krishna was born, celebrate Holi in a grand way. Similarly in Mathura and Vrindavan, where he was raised in, and Dwarka, where he later ruled, have become the thronging grounds for devotees of Krishna. Holi is celebrated in these places with great fervour.

The History Of The Dwarkadhish Temple 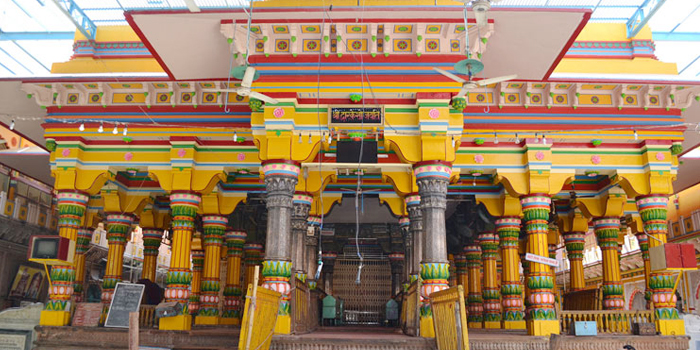 The Dwarkadhish temple is a Hindu temple that is dedicated to the Hindu deity Lord Krishna. Krishna is worshipped in the name of Dwarkadhish, which means the King of Dwarka. It is one of the principal pilgrimages of Hindus. The temple is located in the city of Mathura, Uttar Pradesh along the banks of the River Yamuna.

Mathura is the city in which Lord Krishna lived from the ages of 10 to 28 before he moved to Dwarka. The temple houses a beautiful idol of Lord Krishna in black marble and an idol of Radha made up of white marble.

The period of Krishna's life in Mathura and Vrindavan is traditionally seen as the romantic period of the young love between Krishna and Radha, the tales of which have led to the composition of countless poems and devotional songs.

People from all walks of life throng to the temple flock to the temple to participate in the festivities. They come together to smear each other in colours. The temple priests spray the devotees with coloured water as a symbol of the joy that is spread to the lives of everyone that is present there. 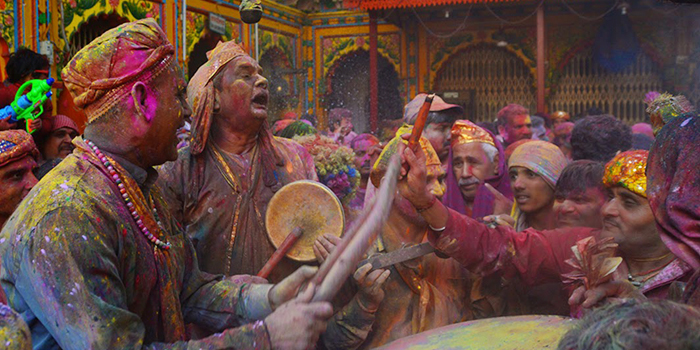 Another group of avid participants in the Dwarkadhish Holi celebrations is the foreign tourists who visit Mathura at this time to witness the festival. The tourists gladly embrace the festive spirit and join in with the locals to rejoice in the spirit of the colourful festival.

Besides tourists, there are a lot of members of the International Society for Krishna Consciousness, commonly known as ISKCON, who participate in the Holi celebrations in Mathura. Members of ISKCON participate devoutly in the celebration of Holi to rejoice the love of Krishna and Radha.

People from all over the country also decided to visit Mathura at this time. Devout Hindus and followers of Krishna throng to Mathura and consider it a blessing to be drenched in the colours.

Mathura is easily accessible by trains. The nearest train station is Mathura junction and the nearest airport at Agra. Mathura has plenty of hotels and dharmashalas to house guests and devotees who come to visit. Holi in 2021 is dated to be celebrated on 10th of March.